Sowing the Seeds of Our Future, One Child at a Time

Children are the seeds of our future and the generation that will resolve—from a greater level of consciousness—the conditions and problems the previous generations created. That’s why the topic of children and how to raise them in this work is one of the most common requests we’ve received from our global community.

Responding to the requests of parents and grandparents who want their children to learn mindful practices beginning at an early age, this summer we released “The Place Where Thoughts Become Things,” our first children’s meditation for kids between the ages of 4 to 12. The goal of this meditation is to properly program our children to understand that their thoughts become things, and that they can begin to think and feel in more self-supporting and unlimited ways—based on how they are programmed.

I feel that the earlier the intervention, the better. For example, children between the ages of 0 – 2 produce slow brainwave patterns, which means they function in a realm of delta. These are brainwave patterns that occur in meditation or the deepest stages of sleep. This is why infants only stay awake for short periods of time.

Between the ages of 2 – 6, children’s brainwave patterns move into theta, which is a very hypnotic and suggestible state. Due to these delta and theta brainwaves, and the fact that they have not yet developed the analytical mind, in the first six years of a child’s life they are very programmable. Thus, because the editing function of the mind has not yet formed, information goes right into the subconscious mind. Comments like—big boys don’t cry, little girls should be seen and not heard, you’re not very good at math, money is the root of all evil, you’re like me - you have a short temper—these are all negative suggestions that begin to subconsciously program a child. If we can negatively influence a child at these early ages with such reinforcements, it makes sense that we can program a child in the opposite way.

Between the ages of 6 – 12, children move into alpha brainwaves, which is the imaginary realm. This stage is where children pretend, play make believe, dream of being astronauts and princesses, and so on. This is the realm of the imagination—a very important realm—because during this stage children are as creative as they are easily influenced.

A child’s analytical mind begins to form right around the ages from 6 – 8. When the analytical mind more fully forms around the age of 12, the tween’s brainwaves move into beta brainwave patterns. In beta, our attention is predominately on the outer world. This is why it’s important to program children before the analytical mind forms (because it takes very little effort to subconsciously influence them) and why training children with positive suggestions at a young age builds the foundation of who they become later in their life.

In the past, and we will continue to do more, we have held teen workshops to help teens understand the principles of leadership, what values are, to teach them about their own biology, how hormones influence them, and how to create their own reality. “The Place Where Thoughts Become Things” is the start of the work we’d like to do with children.

Ultimately, we want to teach people how to create their life by changing their thoughts and feelings so they can build a better future for themselves, the planet, and everyone living on it. To do this, however, it’s paramount for us to invest in better ways for our children to think, learn, grow, and be programmed in positive ways.

As children grow, their thoughts and feelings can work for or against them, which is why proper programming at an early age is essential. This is the important, fundamental point when it comes to the meditations we are designing for children. In fact, we’ve heard that children of parents in this work regularly ask their parents to do the meditation before they go to bed. Parents report that they love to do this meditation as much as their children, and that they do it together every night before bed. That habit—children learning to meditate regularly—is a great programming habit in and of itself. 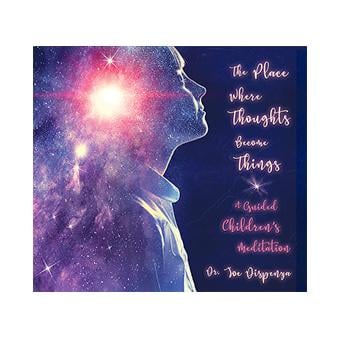