In April 2018, Tillman’s (Til) doctors detected a very aggressive cancer tumor called an anaplastic ependymoma Type 3—a rare, fast-growing tumor that most often occurs in the brain, but it can also occur in the spine. For Til, the tumor was lodged in his spinal cord between two of his vertebrae, causing the vital nerve supply to his lower body to be cut off.

The following month, his doctors performed surgery to remove the tumor; however, complications during the operation caused nerve damage. As a result, he lost most of the use of his legs. In addition, the right side of his body, from his foot to his hip, went numb. To top it all off, he experienced a frozen shoulder, which makes it difficult to move your arm.

Since the tumor was located within his spine and close to his central nerves, chemotherapy was not possible. And so, in June 2018, Til instead began a 30-day radiation treatment, the result of which improved his entire nerve system. By December 2018, he was once again able to walk, and with that, he slowly he returned to work.

In October 2019, however, the tumor returned—this time more aggressively. In November, within one week of each other, he had two consecutive surgeries to remove the tumor. Within a few weeks, his conditioned worsened. And then, in December 2019, his doctors told Til, “It makes no sense to carry out any additional treatment or surgery. You should prepare for the worst. Please go home and die.”

By this point, Til’s pain was so severe in his spine and legs that he needed to take pain-management drugs just to make it through the day. During this time, the tumor enlarged enough in his spine that he completely lost motor function in his right leg, could barely lift his left foot, and was confined to a wheelchair.

It was during December 2019 that he started reading  You Are the Placebo, in addition to practicing the meditations. Til also decided to stop fighting the tumor and instead make peace with it. He talked to his tumor regularly and promised it that, in addition to taking better care of himself, he would do everything to free his soul of the feelings and emotions that held him prisoner.

In January 2020, after his friends attended our weeklong Cancun event, they placed him on the waiting list for Dubai. On January 7th, he was notified that he could attend the Dubai event; however, just to make it to the workshop and through the day, Til needed to take a laundry list of pain-management drugs.

During the week, he went all in on the meditations and had some profound, mystical experiences. In one in particular, he felt so much peace, love, and joy that he didn’t want to move (see photo below). He continued to lay on the floor for an hour after the meditation. Knowing he was being healed by these new feelings and elevated energies, he wanted to relish the moment. 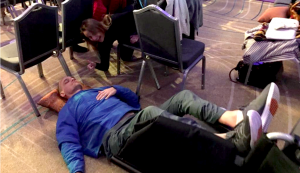 Til immediately began scaling back his drug prescriptions and on January 22nd, a week after the Dubai event, he completely went off his pain medications. It also happened to be the same day his follow-up MRT scans of his spine were taken (see below). The pictures showed that this very aggressive tumor—which had grown in just a few weeks, caused him to be wheelchair bound, and threatened his life—had shrunk by more than a third.

In the image on the top (pre-scan before the event), directly below the larger semicircle, you can see the tumor taking up space in the middle of the spinal cord where the nerves should be running down the spine to the body. If you look at the image on the bottom (taken after the event), you see that the gray mass has diminished by a third. 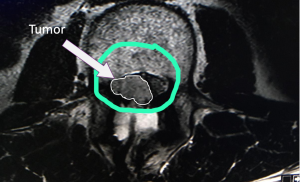 Pre-scan before the event 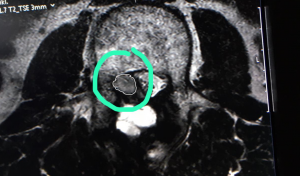 Scan taken after the event

Faced with a terminal diagnosis only one month prior, Til read my book and went all in on the meditations. At our workshop, he had an intense week, had some really profound experiences, was a part of the coherence healings, and now he’s on his way. Today, only a few weeks later, he’s walking several meters at a time without any assistance. In my lifetime, never did I imagine we would witness the types of healings we are seeing, and yet they are happening with more and more regularity. Why? In a previous blog post, I talked about how our students have broken the four-minute mile of consciousness. Once you pierce that level of consciousness, the mindset of what is and is not possible changes.

Every time someone heals themselves, they are breaking a belief system about what was once thought impossible. Each time someone breaks through that veneer—through that layer of consciousness—they leave a huge footprint in consciousness for the next person to step into. This means that the information and memories of what is possible are now imprinted in the field. Thus, more and more people are stepping into that same footprint. In addition, when we witness these types of miraculous healings and events in 3D reality, it’s proof that others can do it too.

The evidence from scientific measurements demonstrates what’s possible, and when people witness the actualization of possibility, their belief in what is possible increases. As a result, like making energetic deposits of possibility into the memory bank of the collective consciousness (the field), as that pool of possibility increases and expands in the field, so too does the evidence expand and bleed into this 3D reality of matter (bodies). The bottom line is, when we believe in possibilities, we believe in ourselves.

This is how we change the world—one soul at a time.