On Sunday, January, 15th, from Lake Garda, Italy, we completed our third global meditation called Project Coherence. As we now know, there have been many studies on peace gatherings, resulting in the reduction of crime, violence, poverty, war, struggle, and strife, while at the same time increasing economic development. Participants from all over the world joined us in Project Coherence under the belief that consciousness has an effect on matter and the world—that we are more than just matter, bodies, and particles.

Shortly after the meditation, I received a note from one of our students that I thought was a beautiful example of our interconnectedness. During the meditation, a woman in New Jersey was visualizing bringing the earth into her heart. “When we went to the heart, I felt all of these shoots and leaves growing from my heart center and through my body. There were branches, leaves, and blossoms coming out my arms, fingers, and ears, as well as white blossoms all over my face. I had literally become the surface of the earth garden.”

When she came out of her meditation and looked down at her phone, her best friend had sent her a picture. She had been walking through a garden in Ireland, looked down, saw moss growing from a rock in the shape of a heart, thought of her friend in New Jersey, snapped the picture below and sent it to her. 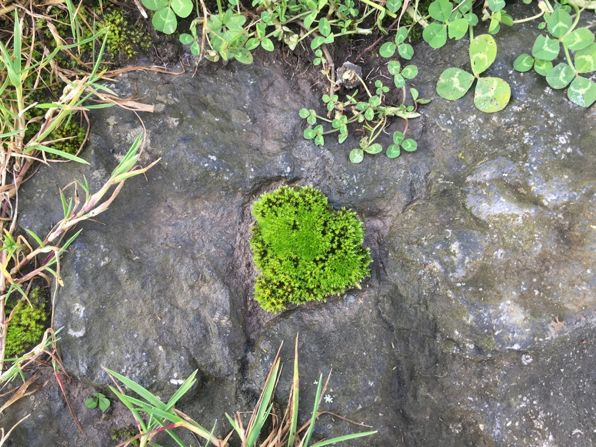 “When I came out of my meditation and saw the picture I had tears streaming down my face. I knew we were connected.”

The American astrophysicist, cosmologist, and author Neil deGrasse Tyson said, “The atoms of our bodies are traceable to stars that manufactured them in their cores and exploded these enriched ingredients across our galaxy, billions of years ago. For this reason, we are biologically connected to every other living thing in the world. We are chemically connected to all molecules on Earth. And we are atomically connected to all atoms in the universe. We are not figuratively, but literally stardust.”

While we’re certainly physical beings who experience the universe through our senses, there’s an element of us that unifies us to a field of intelligence beyond the senses, and that field unifies us with everything and everyone, both seen and unseen. Just as we have an invisible field of energy around us that we have access to, the earth has its own electromagnetic field that we draw from and are connected to. We can choose to either live in harmony with its natural rhythms, blooms, and expressions, or against it, trying to control and manipulate Mother Nature with no regard for her health or well-being. There is a reason why we call her Mother Nature—a mother nurtures and provides sustenance. Without our mother we could not exist.

Quantum physics has struggled to measure and quantity this unified field, but to me it is a loving intelligence and intelligent love that exists beyond the senses. The way that we have access to it is when we get beyond ourselves by becoming an awareness, consciousness, or a thought. It is there that the individual and the collective merge as energy and pure consciousness. This is the unified or quantum field which governs all the laws of nature. This is wholeness, singularity, oneness, and coherent love.

We live in a beautiful world full of majestic mountains, canyon-carving rivers, oceans teeming with life, and elixir-producing rainforests. There’s painted deserts and oases that spring forth from them, sunrises and sunsets of golden-magenta strata—there’s an abundance of fauna, sun, soil, and oxygen-producing flora enabling us to breathe and thrive. When you take the time to marvel at the world we live in, one can’t help but realize it requires quite a unique and delicate balance to sustain this bounty of life.

At the same time, Mother Nature is being threatened by our mindlessness, greed, and disrespect. As a result, we are living in a time of extremes, and these extremes are both a reflection of an old consciousness that can no longer survive and a future in which the earth herself wants to transform. This old consciousness is driven by survival emotions like hatred, prejudice, anger, fear, suffering, competition, and pain, and they serve to seduce us into believing we are separate from this field.

Because everything is moving towards extremes, many of the current systems, whether political, economic, religious, educational, medical, or environmental are all being pulled apart in certain ways. We can see it most prominently in journalism where we have no idea what to believe anymore. Some of it reflects human being’s choices and their own personal levels of awareness. Regardless, I believe we have a say in the future we want to create because light, information, energy, consciousness, and awareness cannot be separated. How?

We can create and guide a new future by first opening our hearts and raising our energy. In doing so, if we do it properly we produce a coherent electromagnetic signature, and this energetic frequency begins to entrain everyone and everything within which we are in contact. As you continue to raise your energy and open your heart, you produce a bigger electromagnetic field, and as this field around you expands, it carries a frequency. That energy is information and you have the power to direct that energy.

As an observer, a consciousness, or a thought, when we direct this energy we can begin to affect a downward causation of matter—in other words, we can literally make our minds matter. For us to begin to make an effect on this world, however, it must originate from a place of love. If we continue to do this on a consistent basis—change our level of energy with a greater level of awareness, compassion, love, gratitude, and other elevated emotions—these coherent electromagnetic signatures entrain to one another, and that coherency should be able to begin to unify communities that were once separated by the belief that we are just matter.

Joni Mitchell wrote, “We are stardust. We are golden. We are a billion-year-old carbon, and we got to get ourselves back to the garden.” This is the seen and the unseen, the earthly and the divine, and it is up to us to shepherd the new consciousness and new earth into being, for ourselves, our future, and our children’s future. And it all starts in the present moment.