There are four states of consciousness that contemporary science is aware of. The two that we typically operate in are wakefulness and sleeping. The third area of consciousness is dreaming, which most people don’t pay much attention to, and the fourth state—the one which we know the least about—is the transcendental state. This is the state of mind where mystical experiences or lucid phenomena occur that transcends space and time. Objectively inexplicable, the transcendental state transcends categories, is an experience that takes us beyond linear time and three-dimensional space, gives us insight into ourselves, and produces feelings of oneness with the universe. For thousands of years, poets, philosophers, and mystics have tried to attain or describe this state of oneness.

Since Albert Hoffman first discovered LSD (lysergic acid diethylamide) in 1938 by accidentally absorbing a small quantity through his fingertip, it’s been known that under the right conditions LSD and other psychedelics have the potential to induce the transcendental state. In a groundbreaking new study published in Proceedings of the National Academy of Sciences (PNAS), for the first time ever researchers gave 20 volunteers 75 micrograms of LSD. Using two types of fMRI and a MEG scan, the researchers imaged the participant’s brains while under the influence. They also asked participants questions about their experience while on the drug, allowing the researchers to draw correlations between the participants’ subjective reports and their observed objective brain activity.

What researchers found in the scans of subjects’ brains on LSD was a reduced communication between the parahippocampus and regions related to the sense of self, such as the retrosplenial cortex. It seems that not only did they report transcendent experiences, but the regions of the brain associated with moving beyond reality of the self as we know it were correlated.

“It seems increasingly evident that psychedelics reduce the stability and integrity of well-established brain networks and simultaneously reduce the degree of separateness or segregation between them; that is, they induce network disintegration and desegregation,” researchers stated. Lead investigator Robin Carhart-Harris explained this as the brain being less “compartmentalized” and more “unified” under psychedelics, functioning in a “simpler” or “freer” way. In the paper, he and his coauthors characterize this phenomenon as brain activity becoming more “entropic.” Another way to put it is that participants moved into the whole brain state.

In their conclusion, what the study ultimately revealed was the speculation that the disintegration of the borders of individual brain compartments and the disruption in the rigidity of the individual neural networks that have “become entrenched in pathology” could be used in therapeutic treatments for disorders such as depression and PTSD. More research will need to be done to investigate LSD’s efficacy.

Meditation and the whole brain state

One of the goals in our work is to create a whole brain state. The latest scientific research has shown that a compartmentalization of the whole brain state occurs when we live by the hormones of stress for prolonged periods of time, causing our bodies to essentially become addicted to the cocktail of chemicals the stress creates. It also shows that the more our attention shifts from our relationship problems, to our car trouble, to our back pain, to our job and boss—that kind of shifting of attention is what causes incoherence and disintegration in the brain. The experience of each one of these people, things, objects, or places has a neurological network assigned to it—because all repeated experiences become logged in the brain—and the shifting of attention keeps activating the network. This causes the brain to begin to compartmentalize and segment, like a house divided against itself or a room full of people all competing to communicate at the same time.

Opening our focus during meditation and sensing space, energy, and no “thing,” as opposed to narrowing our focus on material things, objects, and matter, causes these disparate compartments of the brain to begin to unify. Why? Because when we are focusing on nothing material, we’re not analyzing or thinking about anything, and if we’re not thinking about anything we’re quieting down the neocortex where those neural networks exist.

When we no longer shift our attention from one thing to the next, we no longer activate those individual networks. This allows the different compartments of the brain to begin to synchronize because our attention is not on objects, particles, and things—it’s on space, energy, and nothingness.

That kind of openness begins to unify the brain, and when we’re able to sustain this for extended periods of time, the right hemisphere begins communicating with the left hemisphere, and the front of the brain begins communicating with the back of the brain. When this kind of psychic union of polarity between the two halves of the brain occurs, that’s when we have a sense of wholeness, love, and connectedness, and we go from being selfish to selfless. In the scans of the participants on LSD, their entire brain was lit up. 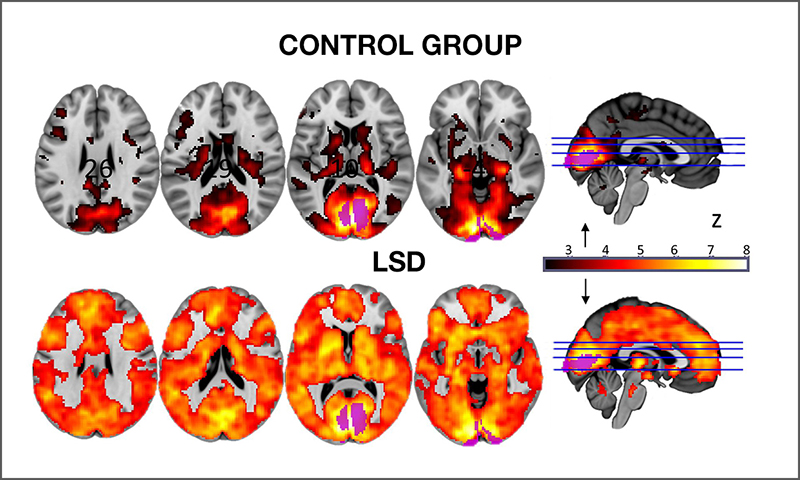 In this unification of the brain, they are able to process a greater stream of consciousness and thus transcend anything that seems familiar or known in this space and time.

It’s been found that the presence of a receptor that regulates serotonin activity in the brain correlates with people’s capacity for transcendence. Drugs known to alter serotonin such as LSD, which fit into the same receptors as serotonin, also induce mystical experiences. If this neurotransmitter is released in larger quantities into the body, it seems that an individual can reach a higher state of consciousness and feel immense feelings of joy and happiness while feeling connected to a broad field of information.

Isn’t it possible then that we can manufacture our own chemicals that fit into those same receptor sites? After all, in our workshops we’ve measured over 4000 of our students’ brains and seen many of them reach whole brain states while in meditation. When they do, our students have reported and experienced mystical events transcendent of any familiar space and time. In these experiences our students have reported receiving a loftier view about themselves and the nature of reality, and they report their inner experience to be hundreds of times more real than any past external experience. With these particular cases, we witnessed brain scan measurements that elicited significant objective patterns while they were having those subjective experiences—which mimicked the scans of the LSD volunteers.

There’s a lot of correlations between the LSD study and what we strive to do in our work to move beyond space and time when creating a whole brain state. We know that the pineal releases certain metabolites of neurotransmitters like serotonin and melatonin—however they carry a different message—closely similar to LSD and other psychotropic drugs. We work to intentionally induce these states by activating this alchemical gland, and when we do many students reports similar transcendent and mystical events. While LSD can be used medicinally for a taste of the transcendent experience, too much of it can cause a person to be dependent upon it, and rather than embrace reality they use it to escape it. Yes, it can open the doors of revelation, and this is important to the human experience, however certain parameters of supervision are absolutely necessary.

But instead of relying on an exogenous substance, meaning outside of ourselves (in this case the LSD), our community of students are working with an endogenic process—creating these substances within us. Our goal is to be able to reproduce this effect on our own through intention and specific forms of mediation (and discipline through meditation), and when we continuously move into this state the doors of dimension may open to us. When this happens, we may never return to business as usual.