Every other week, Dr Joe writes a blog in which he elaborates on common questions, introduces new material, simplifies complex ideas, and expounds upon the foundational teachings of this work.

Understanding Resolutions and How to Keep Them

Making a resolution certainly feels a lot easier than sticking with one. There’s an automatic reward, an inertia, when we decide to make a change for the better. In those initial days and weeks the energy is palpable and the desired goal feels achievable, maybe even easy. This is the year we’re going to lose that weight or get organized, but then something happens. We decide the gym can wait until tomorrow or that the schedule can be put off. Our old habits creep back in and we eventually succumb to our well-known routines.

If so, the first thing you should understand is that impatience will get you nowhere. Remember, these are deeply rooted habits developed over a period of years and they’re not going to change in an instant. Negative self-talk only reinforces the existing neurocircuitry in your brain; that one that says this is who you are and who you will always be.

Santa Claus and the Magic Mushrooms

Those of you at Dr. Joe's Advanced Followup in Seattle in November will understand the significance of the Pine Cone and the Pineal Gland.  This important gland is considered the doorway to the subconscious mind.  Remember: Your brain and body is one of the greatest pharmacy's and can manufacture the chemicals of transformation without the need to ingest substances to do so.

n of the Amanita Muscaria mushroom to the story of Christmas and Santa Claus is a truly fascinating tale. The legend, or more accurately, the myth of Christmas, began very differently from what we have come to believe in today.

Saint Nicholas (270-346 AD), it was said, was a real person and widely recognized as an actual Christian saint. He has origins in Greece around the third century AD. Saint Nicholas, became well known as the patron saint of sailors, and most especially, of children. His popularity became widespread throughout Russia, and, most particularly, Siberia.

It is purported that Saint Nicholas was persecuted for his Christian faith by the brutal Roman Emperor Diocletian (284-305 AD). Yet, perhaps, the story of his oppression may be more about supporting the Christian myth, than to historical accuracy, simply due to the fact that this appears to be a common thread. Wherein there have been numerous distortions and outright falsehoods centered around the legend of Christmas.

Somewhere along the way, Saint Nicholas morphed into Saint Nick, and eventually, so we are told, he became the origin of our modern day version of Santa Claus. 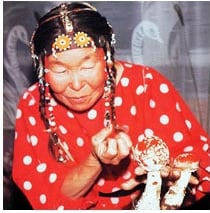 However, in parts of eastern Siberia, a much different tradition was honored at this momentous time of year we have come to know as Christmas. In these ancient villages, the tribal shaman or medicine man, would be the one to co-ordinate a celebration that was meant to mark an act of expanding consciousness.

During those times, it was a tradition for the shaman to venture out into the forest in search of the Amanita Muscaria mushrooms, which were found growing primarily under pine or evergreen trees. The shaman would collect the mushrooms into a sack or satchel for all the people of his village, as part of this celebration. In keeping with the ritual, the shaman would be dressed in a red and white clothing (pictured right), sometimes with white fur around the collar, to symbolize the colors of the Amanita Muscaria mushroom.

The people of his village all liv 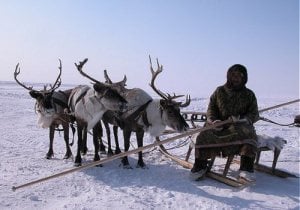 ed in yurts, which were tent-like structures covered with reindeer skins. In the winter time, the main entrance to the yurts would often become buried in deep, heavy snow. So, out of necessity, the shaman would have to enter the home through the secondary entrance, which would be found at the top of the roof or the smoke hole, which would be considered to be the chimney in a modern home.

The shaman entering through the chimney was seen as both a symbolic, as well as, a necessary gesture, as he came bearing his gifts of the sacred Amanita Muscaria mushrooms, as if descending down from the heavens. Hence the legend of Santa Claus entering the home by way of the chimney.

Christmas, at its very inception, actually represents a celebration of expanding consciousness, as symbolized by the green pine tree/Christmas tree, aka, the pine cone, aka, the pineal gland.

Once the shaman delivered his "presents" to his villagers, the mushrooms would then be hung to dry above the home fires or the fireplace, suspended from strings or stockings. The shaman himself, may have even have placed them on the pine trees to dry in the sun, as he gathered them in the forest. Thus, our tradition of hanging stockings by the fireplace and placing brightly colored ornaments on the green Christmas tree.

The mushroom itself, (pictured right), could be seen as a symbol for the shaman (pictured above), or Santa Claus, with its red and white cap (Santa's hat), the long white stem with the hanging skirt (Santa's beard) and the soiled black roots (Santa's black boots).

To add even more irony to the story, it turns out that caribou, or reindeer, are also fond of eating the Amanita Muscaria mushrooms and just as humans, they too experience a psychedelic euphoria and may wander about high on a psychedelic experience of their own. Therefore, this is where the legend of Santa and his "flying" reindeer that pull his sleigh across the night sky on Christmas Eve comes into play.

The celebration of Christmas has lost much of its spiritual, and even to some extent its religious importance and has become completely overshadowed by its commercial significance

So in essence, Christmas, at its very inception, actually represents a celebration of expanding consciousness, as symbolized by the green pine tree/Christmas tree, aka, the pine cone, aka, the pineal gland. The pine tree also serves as symbology for the "Tree of Life" or the "World Tree", while the lights or garlands we wrap around it represent the kundalini energy rising up the chakra ladder, or the tree found within the human body.

While the colors of red and white would symbolize the shaman (aka Santa Claus), or the gifts found under the tree, or in other words, the Amanita Muscaria mushrooms that are found growing under the pine or evergreen tree.

In fact, it used t 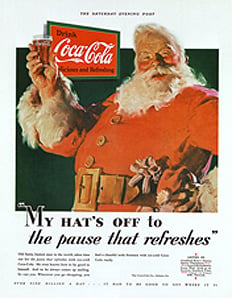 o be traditional for the red and white mushroom to often be depicted in antique Christmas imagery, such as cards, ornaments, elves, fairies, etc.

While the modern day image of Santa Claus that we have come to accept in this country, essentially was spawned in the marketing department of the Coca-Cola company in the 1930's, as a ploy to sell more Coke to children. And as was noted earlier, soft drinks, such as Coca-Cola, are some of the main inhibitors in the healthy function of the pineal gland.

So thus, the legend of Santa Claus, which was once strongly associated with a celebration of expanding consciousness in the pineal gland though the sacred mushroom and DMT, was rechristened by a soft drink company, whose ingredients are known to contribute to the calcification of said pineal gland. (See picture of The Pine Cone pillar or Pineal Gland at the Vatican - right) 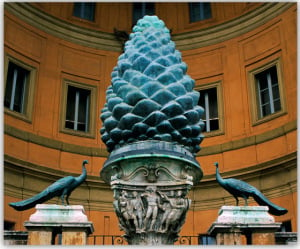 Regardless, it is undeniable that the celebration of Christmas has lost much of its spiritual, and even to some extent its religious importance and has become completely overshadowed by its commercial significance. Once again, another common thread that now runs through all holidays such as Easter, Halloween, Valentine's Day and even, to a lesser degree, our own birthdays.

The commercialization of religious holidays can be traced back to the implementation of the Gregorian calendar, which significantly altered the concept of time as was practiced and followed by indigenous peoples around the world.

Particularly, the Mayan calendar, which was destroyed on orders by the Spanish King, who just happened to be the head of the Holy Roman Empire.

There Was Nothing magical about the Band-Aid. Or Was There?

I’m sure all of us cut ourselves at some point during our childhood and the first thing we did was to rush directly to our mothers for help. She may have addressed this seemingly devastating trauma at the time with all of her attention, a small detailed examination followed by soap and water, some calm reassuring words, a warm embrace, and then a Band-Aid. At that moment, the pain very likely went away…and you ‘felt’ better.

Trailer From Documentary: "Your Life, Your Creation" Featuring Dr. Joe

This is a trailer for new Spanish Documentary from Jorge Patrono soon to be released.

The Documentary is about science and spirituality applied to our daily life, featuring 30 experts from all over the world, including Dr Bruce Lipton, Marianne Williamson, Laura Silva, Gregg Braden, Dr Jorge Carvajal, Enric Corbera, Don Miguel Ruiz and many more.

Click on the heading above to read Dr. Joe's Thanksgiving message to you.

A few years ago a woman we’ll call Mrs. S went to the hospital for some routine tests. Mrs. S. had a heart valve condition called tricuspid stenosis. She also suffered from a milder form of congestive heart failure. Neither condition was considered life threatening.

The treating physician, Dr. Bernard Lown, examined Mrs. S. and found nothing out of the ordinary. Later, another doctor accompanied by a host of residents doing routine medical rounds with final year students and interns, examined Mrs. S. At the end of the visit this same doctor announced in front of everyone – including Mrs. S. – that the patient had TS.

Medically speaking, TS is an abbreviation for tricuspid stenosis – but Mrs. S. really believed that it stood for “terminal situation.” Soon after the second doctor’s declaration, Mrs. S. developed symptoms that mirrored a more advanced form of congestive heart failure. It was as if she accepted, believed, and surrendered to the idea without any analysis that she was dying. Dr. Lown tried to explain the mix up but Mrs. S. wouldn’t listen. It was impossible for Mrs. S to hear anything else. Within hours, she got progressively sicker and died later that same day.

The story of Mrs. S. actually happened and is a good example of the nocebo response. Nocebo (“I shall harm”) is the idea that negative thoughts, feelings and emotions can produce negative outcomes. Mrs. S. was a reasonably healthy person. There was no evidence of any fundamental change in her heart condition and yet she still died. What happened? Is it possible that Mrs. S. created the conditions she ultimately died from just by thought alone?

Journey to the Netherworld: The Advanced Followup in Seattle

A creative expose by Syvonne Kozuch

Enjoy images from our recent Advanced Followup Workshop that was held October 31st - November 2nd, 2014 over the Halloween weekend in Seattle. This was truly a journey inwards - a crossing between this shadow world, into the real world beyond the veil.

How can the preacher in the Deep South, in a moment of religious ecstasy, drink strychnine and have no biological effects? How can certain Indonesian children chew on glass and not bleed? Why do firewalkers not burn their feet on the hot coals when temperatures soar above 1000 degrees? How is it possible for an ordinary, middle aged mother to lift a 2000 pound car that has crashed and pull out her children who are pinned underneath?

After being brought back from the brink of death by the Jane Goodall Institute, Wounda the chimpanzee makes a simple gesture of thanks that will melt your heart.